It’s 2016 and I think we’ve finally come to a stage where men no longer feel they have to be embarrassed or ashamed by wanting or having a rhinoplasty procedure.

In fact, in Australia, we’re the front runners of male rhinoplasty and even in our FacePlus Medispa clinics in Sydney, I would say men account for one in three nose jobs patients, compared to one in fifteen in the U.S, and one in twenty in Europe.

So are Australian men simply clumsier? Are we born with aesthetically displeasing honkers? Or are we just a little bit more concerned with our appearance than our American and European counterparts? Personally, I daren’t say, though I do think that our love of contact sport plays a big part in it.

Whereas crash helmets and padding are all the rage in sports like American football, we don’t have the same safety measures in AFL and our love of rugby and cricket might also add rise to the numbers of men seeking rhinoplasty after a sports injury.

Whether it happened recently or as a child, I often see patients who come to me after the said injury causes a functional inconvenience

or hindrance rather than an aesthetic one.

Despite the fact rhinoplasty is a popular treatment for Aussie men, there’s still some unease when guys come to see me at consultations. I believe it’s more because men do not want to be associated with having had “work done’ or be labelled as having had cosmetic surgery. However, social understanding and acceptance has helped ease any pre-existing pressure and allowed many men to come forward and at least have the discussion about rhinoplasty as an option to any functional or aesthetic concern the may have with their nose. Whether it be professional sportsmen, dancers, gay or straight, young or old, men are becoming more open to the idea of reshaping and/or rebuilding their noses. 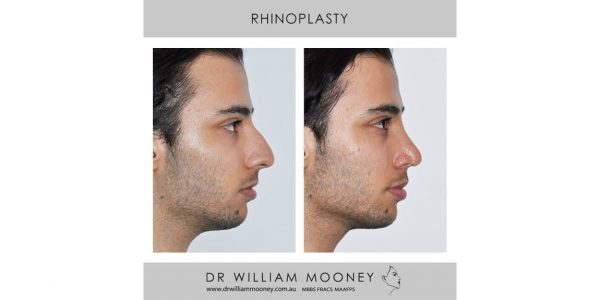 Is rhinoplasty for men different than for women?

Ohhh yes! As with any cosmetic surgery, facial aesthetics and balance are key in patient satisfaction and what is aesthetically pleasing on a woman will not be the same for a man. Most men tend to want a strong, defined and ‘masculine’ nose but will not want to look as if they have had a ‘nose job’.

Going back in time, a man’s nose was linked to nobility status as well as personality traits. For example, a Roman (or aquiline) nose indicated great decision and considerable energy. It’s perhaps due to historical ideas that men are less likely to opt for a smaller nose with a thin bridge, not only because of perceived links to status but also as it may not align with his other broader facial features.

In any case, we take great care in listening to our patients concerns and needs to understand how best to proceed. Some men may opt for a more feminine nose, it’s often simply a question of taste and one that will be discussed in greater, more personal detail in a consultation.

Rhinoplasty is a relatively simple and safe procedure that can also help improve the functional aspect of the nose, opening the airwaves thus making it easier to breathe through your nose in daily life and whilst sleeping, therefore reducing snoring and helping give the patient a better night’s sleep.

Far from being a modern practice, an ancient Egyptian medical text documents rhinoplasty procedures as early as 3000 to 25000 BC so you could say it’s been somewhat tried and tested over the years! So if rhinoplasty is something you’ve been considering, start a conversation, or have a look at these before and after pictures here, after all, there’s no harm in having a nose.