Tip-plasty surgery addresses concerns a patient may have specifically with their nasal tip.  The surgeon is able to alter the cartilaginous tip alone without operating on other areas of the nose such as the bridge which is composed of bone.

Patients often assume that as there is no bone involvement – the tip would be the most straight forward part of rhinoplasty surgery.  However, for many surgeons the tip of the nose is the most challenging aspect of the surgery as it is the tip that contributes a large percentage to the overall appearance of not only the nose but the entire face. With decades of experience, Dr Mooney has developed the ‘Diamond Tip’ surgical technique to ensure the best possible nasal tip for patients.  Originally created to assist his registrars, the diamond tip has now become an integral part of Dr Mooney’s rhinoplasty and tip-plasty surgery.  Dr Mooney has presented his findings on this technique at several international conferences and is referred to as one of the premier rhinoplasty surgeons in the industry.

Tip-plasty can be performed via both an open and closed approach, both under general anaesthetic, however due to increased visibility and accessibility Dr Mooney favours the open approach.

As with traditional rhinoplasty, the open approach is accessed through a small incision made through the columella (in between the two nostrils).  Nasal tip surgery generally involves various cartilage grafting and suturing techniques in order to sculpt the tip.  For some rhinoplasty revision cases and minor nasal tip correction, Dr Mooney may choose to use a closed approach in which the tip is accessed via the nostrils with no incisions, and occasionally this can be performed under a local anaesthetic for select patients.

Patients may seek tip-plasty if they are unhappy with the tip being too:  square, round, bulbous, narrow, wide, droopy, or crooked. 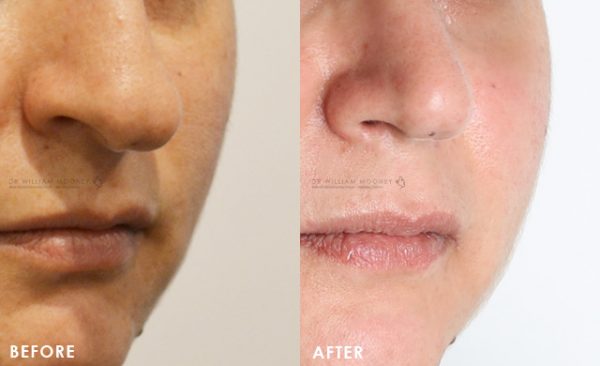 In addition to cosmetic concerns, patients may also require tip-plasty surgery for functional reasons.  Often, patients who have had rhinoplasty surgery may seek a revision to the tip of the nose because it may have been made too narrow – or because it has started to droop due to lack of structural support.  Both of these issues can impair the patient’s ability to breathe properly.  Dr Mooney employs a range of techniques to repair these issues, allowing patients to breathe easy again.

Although the nasal tip is made up of cartilage and not bone, certain traumas to the tip of the nose may cause the cartilages to become damaged, requiring tip-plasty.

Our beautiful patient of Filipino descent is a perfect example of how tip-plasty can dramatically define the nose, also allowing the entire face to appear slimmer and more proportionate with the other features.

Please contact our Patient Coordinator through our Online Enquiry Form or call 02 8897 0079 to book a consultation today.

Any surgical or invasive procedure carries risks. Before proceeding, you should seek a second opinion from an appropriately qualified health practitioner.